Late last year I had to replace my old Dell laptop with a new device. This happened to coincide with a move towards doing a lot more work with network virtualization technologies and software development.

My old Dell laptop had served me very well and I was comfortable in a windows environment, consequently, my first instinct was to look at a new Windows machine. However, the more I tried to work with open source software packages and the more online tutorials I watched it became clear that this work area was the domain of the Mac. Everything felt like it was optimized for OSX/Linux, with support for Windows being more of an afterthought. I already had an older iMac and a MacBook Air for family use so I had some familiarity with Apple products and OSX but to switch to an Apple for work was still a big step. I starting using the MacBook Air and after a few weeks was comfortable enough to decide that I did want to make the move to a Mac for work. I considered buying a newer MacBook Air but decided that the new MacBook Pro would probably provide the performance and scalability I would need going forward.

So how has it been? In a nutshell, fantastic! Would I recommend it? Absolutely. 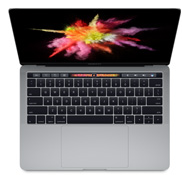 The machine is small, thin and light – only fractionally bigger and heavier than my slightly older MacBook Air but with a bigger screen. I like the keypad – I find it very fast and responsive. The bigger TouchPad is very good, especially once you learn some of the gestures – I do not use a mouse at all now. The much-maligned Touch Bar is also great. I don’t use it that much apart from the Touch ID, which works very well,  but I think it’s a fantastic idea and will probably use it more as more applications are integrated. I’m not sure why people don’t like it – most don’t say why in their reviews. I also don’t have any complaints about the 4 x Thunderbolt 3 ports – it’s the price of the adaptors that’s frustrating. Overall performance seems very fast so far although I have not stressed it that much yet.

One issue – after 6 months half of the screen went black so I had to get the whole screen replaced under warranty. A fairly painless experience although it did mean two trips to the Apple Store and 2 days with no machine.